You have doubtlessly seen them parading down the streets of your city, or perhaps on your school campus with their colourful clothes, intensely dark make-up, giant hats or colourful hairdos. Sometimes they are walking alone, talking to themselves, or surrounded by friends, gesticulating grandly, obviously very excited about whatever the topic might be. Their mere presences seems like a spectacle worth attending, and they are not afraid to put on a show, not worrying about the ridicule of what they might be doing, not even giving a second thought about what others might be thinking about them. They are the eccentrics. They are the weirdos. They are the crazy ones.

But secretly, you wish you could be one of them, don’t you?? Well, this may be a very large assumption to make, and I do concede that it might be completely erroneous, at least for some of the people concerned. Not everyone is very outgoing or a showman/showwoman, some people are more moderate in their characters, more reserved, and it is perfect like that, because we are all different and unique. This is exactly the point I wanted to touch in this post though. We are all unique. What the eccentric people do, is simply hyperbolize their uniqueness (though not always, since most of them are genuinely as crazy as they seem), not being afraid to let out who they really are. And this is an important lesson to learn for anyone who wants to be themselves. Not to be afraid to show who you are. And the best way to do so, at least when it comes to people you don’t know, is the way you dress.

It is all well and good to say that outside appearances do not matter, but this is not exactly true. Yes, we should not judge a book by its cover, but we inevitably will, since clothing is the frontmost stage we possess to express ourselves. We are creatures who use their eyes after all. Which is also why we usually like to reflect who we are in what we wear. Whether we are wearing a suit, leopard print skinny-jeans, or a t-shirt with a logo on it, those pieces of clothing tell others a little something about ourselves. So why not use this as an opportunity to show others who you truly are?? You may be a closet eccentric who is afraid that others will judge you. Or you might prefer to be the innocuous observer, blending into the background. Or you might just want to fit in, and so will dress like everyone else around, so as to not get judged. This is a mistake, at least in my opinion.

People will dress like others in an attempt to be part of a group, to give them a sense of belonging. Which is not a bad thing, as long as you do not lose yourself in the process. Giving up your personality to be part of a larger group is useless, because no matter how crazy or weird you think you are, there will always be others who are similar, and with whom you will be able to connect. The easiest way to find those people?? Well, they will usually dress in a way that is similar to you. Being part of a group is ok, but being your unique individual within a group of unique individuals is even better!! Oh, and if you’re afraid of being judged by others, well let me put this bluntly: you are only an object in their eyes. You are one amongst many. Most of them will forget they saw you the moment they aren’t looking at you anymore. But if your style catches the eye of someone because it makes them feel like they can relate, then that’s a good thing, because they might even compliment you about it or strike up a conversation because they think you look interesting.

So never be afraid to let your true colours shine…or your true blackness, if that’s what you’re into!!

Be yourself truly, show it, and don’t care what others think. 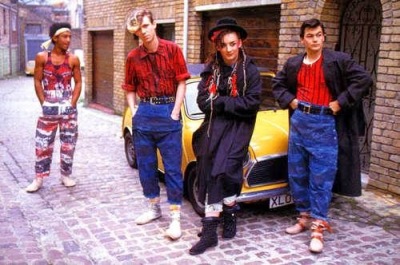 One thought on “To Be or Not to Be…Eccentric”